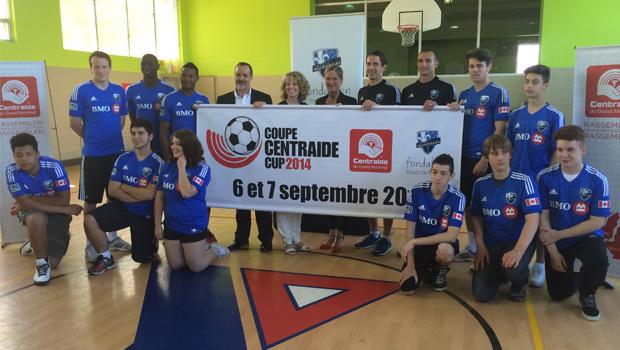 Montreal, June 9, 2014 – Centraide of Greater Montreal and the Montreal Impact Foundation announced on Monday that they were partnering once again to organize the third annual Centraide Cup, to be held on September 6 and 7 at Stade Saputo. All proceeds from this soccer tournament will be used to support agencies that work with at-risk youth in Greater Montreal.

The two partners made the announcement at the Hochelaga-Maisonneuve YMCA in the presence of Impact team captain Patrice Bernier and players Wandrille Lefèvre, Maxim Tissot, Hassoun Camara, Troy Perkins and Evan Bush, who marked the occasion by participating in a friendly soccer game with young people from Maison de Jonathan, a Centraide-supported agency that helps dropouts aged 12 to 17 on the South Shore.

Some thirty teams will be competing for the coveted Centraide Cup, made up of employees from companies in the Greater Montreal area. This unique tournament gives amateur soccer players the opportunity to play on one of the most prestigious major league soccer fields. They will be combining fun with community building as the $15,000 registration fee will go to support or develop effective social programs, especially in the prevention of school dropouts and in the improvement of the quality of life for youth and families in disadvantaged neighbourhoods.

New to the 2014 Centraide Cup program will be the Celebrity Match between two teams of personalities from the worlds of sports, entertainment and media, as well as young participants in agencies supported by Centraide. The Centraide Cup will also be an opportunity for families to partake in a great soccer festival, because Stade Saputo will be open to the general public, free of charge, all weekend long and will offer animation and inflatable games to entertain the kids.

“One in five Montreal youths lives in poverty,” said Lili-Anna Pereša, President and Executive Director of Centraide of Greater Montreal. “In all, that means 140,000 young people under 18 years of age are in need of support. These youths could fill Stade Saputo six times over. They are counting on us. That’s why we are launching an invitation today, asking all companies that want to promote a spirit of caring and sportsmanship among their employees, to enter a team.”

“With the start of the World Cup soccer tournament only three days away, we are pleased to partner our foundation with this unique sports competition, which contributes to promoting the development of young people, preventing school dropouts and supporting disadvantaged families,” added Joey Saputo, President of the Montreal Impact and Honorary Patron of the Montreal Impact Foundation. “This event once again reaffirms our commitment to giving back to our community.”

How to participate in the Centraide Cup

Companies wishing to register a team with the 2014 Centraide Cup can contact Hector Goyeneche of Centraide, by telephone at 514 288-1261, extension 242, or by email at goyenecheh@centraide-mtl.org. Members of participating teams can help to raise funds for the registration fee using an online fundraising tool. For more information, go to http://www.centraide-mtl.org/en/evenements/evenements-de-collecte-de-fonds/coupe-centraide-2014/ or email coupecentraidecup@centraide-mtl.org. The registration period ends on July 31.