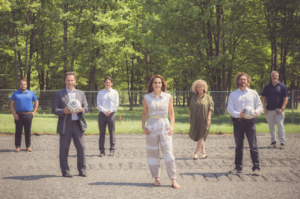 SHAWINIGAN – The Montreal Impact Foundation confirmed on Tuesday, following a meeting between its president Carmie Frassetti Saputo and Shawinigan mayor Michel Angers, that the construction of a new multisport mini-field at parc Paul-André-Potvin in Shawinigan, Mauricie, is progressing rapidly and efficiently. The delivery is planned for the beginning of July.

It will be the first mini-field inaugurated by the Foundation outside of Montreal and the third overall, after the ones built at parc Champdoré, in Saint-Michel, in 2018, and parc Joe-Beef, in Pointe-Saint-Charles, in 2019.