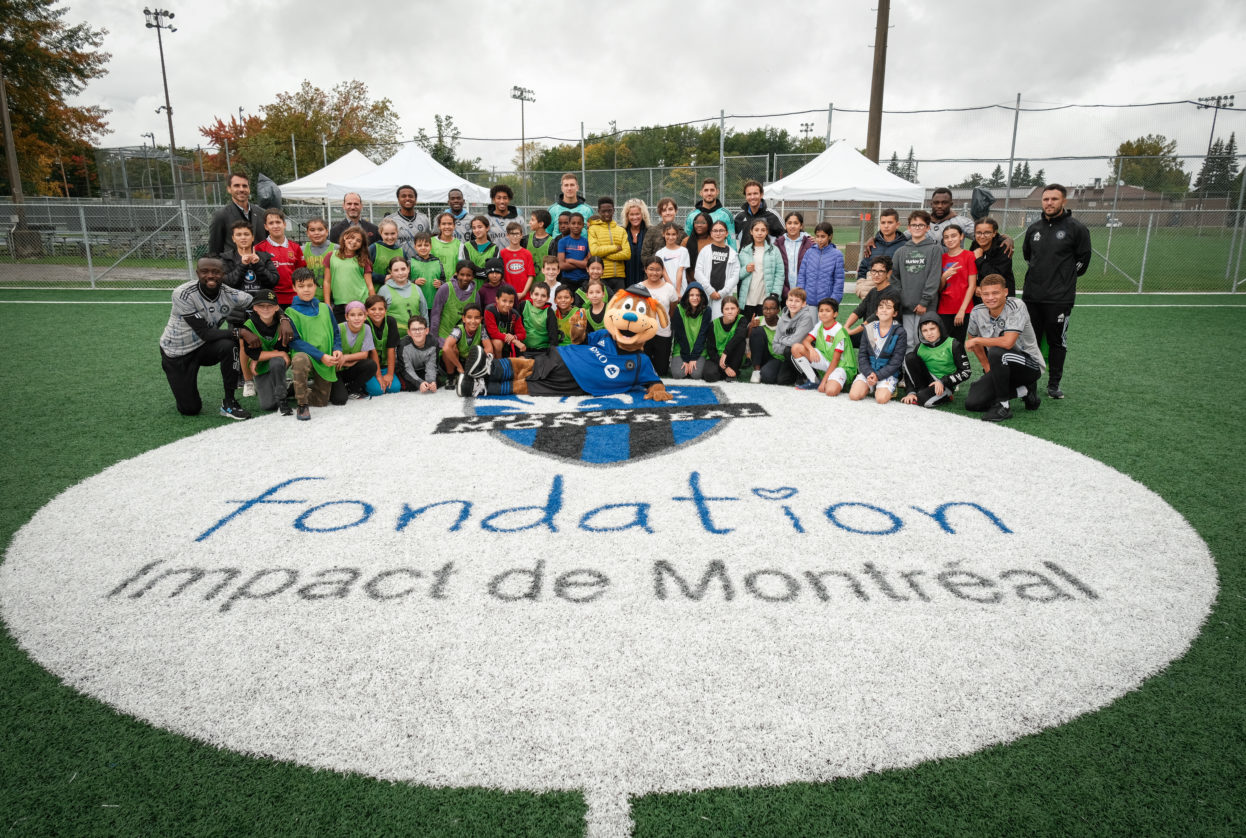 LAVAL – The Montreal Impact Foundation, in collaboration with the City of Laval, inaugurated on Tuesday its newest multisport mini-field at parc du Moulin, in the Saint-François district of Laval. The field is officially open to the general public as of today.

This is the fourth mini-field built by the Foundation, after those in parc Champdoré in Saint-Michel in 2018, parc Joe-Beef in Pointe-Saint-Charles in 2019, and parc Paul-André-Potvin in Shawinigan in 2021. The Foundation assumed the entirety of the project’s construction costs, amounting to $400,000, including the installation of the surface, nets and a fence delimiting the play area.

To mark the event, several players from CF Montréal’s first team as well as Club Academy coaches Simon Gatti, Félix Brillant and Romain Girard were on hand to take part in a few matches with students from the L’Escale elementary school in Laval. Kei Kamara, James Pantemis and Sebastian Breza were among the players who played alongside the children.

“We are always proud to be able to give back to the community through our mini-fields as safe and healthy gathering places for young people and families from underprivileged backgrounds,” said President of the Montreal Impact Foundation Carmie Frassetti Saputo. “From the very beginning of this project, the collaboration with the City of Laval has been very natural and fruitful, thanks in particular to our common goal of improving access to sports for young people and the quality of life in the Saint-François district.”

“The new multisport mini-field in parc du Moulin is in line with one of our administration’s priorities: to make sports more accessible to all citizens and to improve the quality of life in our neighbourhoods. We are fortunate to be able to count on partners like the Montreal Impact Foundation to provide Laval with quality sports and family spaces. We have been working on improving this sector of Saint-François since 2021 and will continue to do so over the next few years so that it may welcome our young athletes in the best possible way,” said Nicholas Borne, member of the executive committee, city councillor for Laval-les-Îles and sports and recreation officer.

This new artificial field is part of parc du Moulin’s spatial reorganization plan, which has guided renovations over the past few months in order to position the park as a family and sports hub in the Saint-François area. Since 2021, the work has allowed for the complete overhaul of the park’s tennis courts and the resurfacing of its basketball court. The next major work, which is expected to begin by 2024, will include a permanent multi-purpose skating rink with basketball and pickleball courts, as well as a new skatepark.